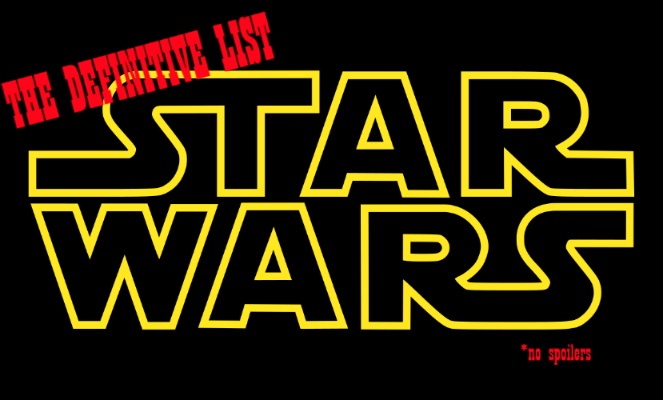 With the release of the newest entry in the Star Wars franchise, everyone and their mother wants to let the internet know that they have an opinion about what Star Wars movie is the best. As someone who writes on the internet, I figure, I’ll jump in on this hype-train for some of those sweet, sweet clicks. I’m pretty sure this is how you do a BitCoin.

The only difference between their list and mine, is that it is impossible to disagree with my list. This is THE DEFINITIVE RANKING of all nine Star Wars movies (don’t worry … I won’t spoil anything. I promise!)

I mean, come on! How would this not be number one. From the dialogue to the special effects, every part of this movie is a masterpiece. And that twist! Who would have seen it coming? This has clearly become one of the classics of American cinema, and I don’t see that changing any time soon. All the emotions! All the drama! All the action! I can’t watch this movie enough.

This is my dark horse for sure. Some of the people say that it doesn’t hold a candle to the other movies and to even place it this high is blasphemy! I say, you are wrong. This is clearly the second best Star Wars movie out of all of them. This is FACT!

My favorite part about this entry in the Star Wars franchise is the aliens. They are so great! The main one is hilarious, and the other ones really stand up since this was released. And when that one character died? O-M-G!

While this entry in the Star Wars canon lacks a little of the character development and dialogue that makes other entries so good, it makes up for it with awesome stars and  …

This is a list of all the wars that in the stars.

Like the last one, this one isn’t much for plot or dialogue, but it makes up for it with badass light saber battles. Whoo-ee! Do you remember when … oh wait! No spoilers. Let’s just say, one character does something and it’s really crazy. I just couldn’t even believe what happened!

At this point in the list we are winding down in the quality of the Star Wars franchise. Suffice to say, this one is pretty bland. The actors were clearly over it and the special effects were aren’t up to snuff with some of the others. I mean who cares about sci-fi airplanes that much? Aren’t you over it yet?

There’s this one character in this movie who is just awful. I really want to say his name …

Anyways, this whole thing is just one giant turd.

Pthhhbbbbb!! This one’s a real stinker. Crappy dialogue, crappy effects, crappy plot! Just pure trash. And seriously, that plot twist? Who didn’t see that one coming? I mean those kind of twists work in some of the other movies, but do we really need it again? Save your time and money!

Some people on the internet that this the worst Star Wars movie out there; others disagree. One thing is for sure though …

I haven’t seen it.

I know, I know … what kind of definitive list is this? I’ll tell you.

Can I have a BitCoin now?